Halloween in the hospital room with Deb, MNF, n lots to B thankful 4 (Taken with instagram) 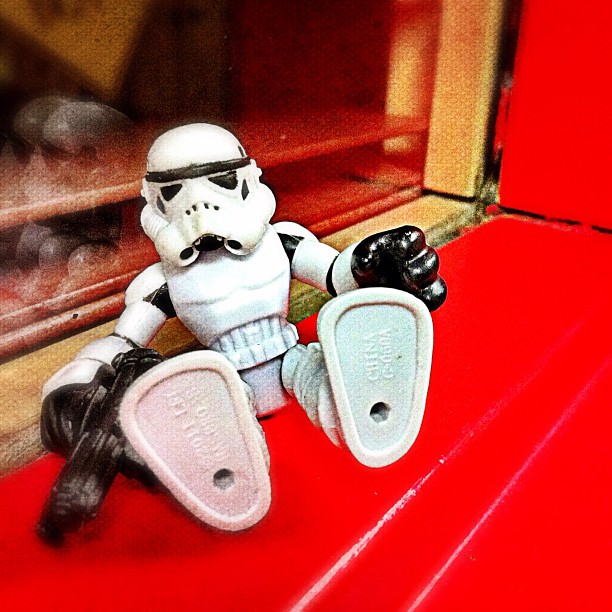 Left outside my office from church yesterday, some kid is missing this gem (Taken with Instagram at Cornerstone Church)

This is just about the first time I have felt like or had the energy to get back on my blog since I got home from Uganda. This particular trip has been the most difficult trip to readjust from and just back into just the normal routine of things. I got sick just about the day I walked into my house (and am still recovering), then Deborah got sick yesterday (and she is still recovering) so I never could distinguish between jet lag and sick lag. I could probably have seen this coming as I spent every ounce of energy I had in Africa over that 10 day period.

It’s more than that though, it’s a deeper connection made with some people literally half way around the world, and our life in my cultural context doesn’t give you any time to “adjust”, it just keeps moving forward at breakneck speed. There is nothing wrong with life over here any more than life anywhere else, ever single place has it’s own struggles, and often they are almost identical in nature, we just always think they are different because of the lens we look through every day.

Today’s Friday Feet comes to you from Kampala as we waited with the gals from Sixty Feet to go inside the second children’s facility in Kampala. I took those shots above that day with this post in mind, even if the two K’s (Kelsey and Kirby) didn’t know what I was doing, and honestly, I can’t remember which K’s toes are shown below, I think they are Kirby’s. What was really amazing to me about life over there is that almost everything we did was either preceded or followed by some kind of worship to our King, and it was often 60-90 minutes at a time, and it didn’t matter what day of the week it was. They just hauled the drums over, dropped them down and we were good to go.

I know Sixty Feet’s ministry name has to do with number of feet deep not actual toes and shoes, but it works for my Friday Feet today, thanks for being such great sports and for the work you two are doing over there Kelsey and Kirby.

This is the last trip post before we get on the plane in a few hours. I will continue to post some photos from the trip over the next several weeks and months as I go through the thousands of images I’ve taken over this trip. I can’t reflect over this trip any more, especially since we really have no distance in time for all our experiences over the last 7-10 days. For now I will leave everyone with the photo above that sums up our awesome driver, who took care of us the entire time. Everyone who has been over knows what this photo means. We love Eddy.

In this post are some shots of us in the crazy fast Eddy van along with one of Olive we all just loved. She was a super nice lady who went with us just about everywhere. It’s hard to sum up this trip. I think I probably will find it hard to sum up the trip for months to come, but overall it was a learning experience, a humbling experience, and hopefully one where we lived out the love of Jesus.

Today was our last full day in Uganda. Tomorrow we will head over to a local market and have lunch before we head for the airport and a long long ride home. Today we went across Lake Victoria to the Bethany Village Orphanage in the morning, and back to Buloba to visit some sponsor children, put up some rain catches, and the woman were able to speak with a group of local woman. It was a very refreshing and uplifting day.

Tonight we had a wonderful last dinner at the guest house with our friends from 60 Feet. It was so great to have the two K’s over for dinner (their first names are Kelsey and Kirby), and I think we all enjoyed some casual discussions, along with African Renewal Ministries who came over as well. There were so many things we experienced on this trip that need to be followed up on, things that God pulled together for our team that became a great start. We understand as a team we probably can’t change the world, but we can continue to take some small steps forward that will collectively make a difference.

Tomorrow we head to the airport for our 11pm flight. Our flight leaves about 2pm Central Time on Thursday, and if our flights are on time, we should be back in Auburn late Friday afternoon. This trip has been incredible to say the least, and God put together a team that had so many different individual gifts and talents that only God could have brought us all together like this. As we head home we have so much to reflect upon, so much to process, but we trust in God to take care of the details and to use this trip to fulfill a purpose that will glorify God.